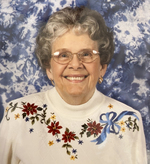 Barbara (Ferrin) Cavanaugh, 94, passed away on Sunday, August 16, 2020 at the Hunt Community in Nashua, NH after a long period of declining health. She was born on July 18, 1926 in Sommerville, MA, daughter of the late Myron H. and Ruth (Cummings) Ferrin.

Barbara was an executive secretary at Raytheon in Bedford, MA for 24 years before retiring. Her faith was very important to her. She was a devoted member of the Merrimack Valley Baptist Church in Merrimack, NH and a longtime volunteer at Southern NH Medical Center in Nashua, NH. She loved going to the beach, reading, playing cards and Scrabble, and spending time with her family and friends.

The family wishes to express their sincere appreciation to all the staff at the Hunt Community Pavilion for the loving and compassionate care they provided to Barbara, especially this past year.

SERVICES: Services will be held privately. Interment will be at Newton Cemetery in Newton, MA.