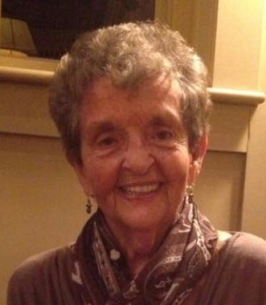 Barbara Robinson Gale, age 92, a longtime resident of Nashua, NH, formerly of Simsbury and then Avon, CT, passed away on Nov. 5, 2022, after a period of declining health. She was the widow of Col. Richard Harris Gale.

She was born in Akron, NY on Nov. 20, 1929, daughter of the late William Henry & Virginia (Stone) Robinson. She graduated from George Washington High School in NYC, then earned her BA from Hunter College, NYC before obtaining a Master’s Degree in Hospital Administration at Hartford Graduate Center.

Prior to her retirement, she was employed by Hartford Hospital as the Director of Radiology for many years. Previously she worked at Bristol Hospital at the emergency room intake. Her stories of those years were always interesting and intriguing.

Barbara enjoyed travel to distant lands, dancing the night away, and any and all celebrations with her large extended family. She could always be counted on for her level-headed advice, a warm welcoming smile, and her hearty laughter. In later years she appreciated her many good friends at the Huntington at Nashua as well as the multitude of activities and social events provided thereof.

SERVICES: There will be no visitation. A Celebration of Life will be held at a later date. Arrangements in care of the DAVIS FUNERAL HOME, One Lock St., Nashua, NH 03064. IN LIEU OF FLOWERS, donations in her memory may be made to The Huntington at Nashua Employee Appreciation Fund, 55 Kent Lane Nashua, NH 03062. An online guestbook can be found at www.davisfuneralhomenh.com (603)883-3401 “ONE MEMORY LIGHTS ANOTHER.”