Obituary for Betty A. Delisle (Hastings) 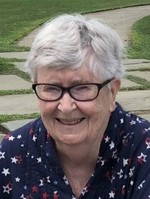 Mrs. Betty A. (Hastings) Delisle, age 89, of Milford, formerly of Nashua, passed away on May 25, 2022, after a period of declining health. She was the widow of Raymond E. Delisle who died October of 2006.

She was born in Somerville, MA on June 22, 1932, daughter of the late James & Helen (Thayer) Hastings. She graduated from Nashua High School, Class of 1950; she then attended UNH Durham.

Prior to her retirement, she worked as a pre-school teacher for Children’s Winter Garden for many years. Betty was a dedicated homemaker, grandmother, and caregiver. She also enjoyed quilting and cross-stitching and was an avid reader.

She is survived by her two daughters and sons-in-law, Bethanne and Bernard Rousseau of Amherst, and Debra and Steven Dusling, of Merrimack; two sons and their spouses, Stephen and Wendy Delisle, James Delisle and his companion, Donna Faucher, all of Amherst; nine grandchildren, Joshua Delisle and his wife, Jennifer of Bedford, Eric Delisle and his wife Andrea of FL, Nicholas Delisle of CA, Peter Delisle of Milford, Tracy Brewer and her husband Eli of FL, Daniel Rousseau and his wife Taryn of Merrimack, Meghan Pearson and her husband Jon-Michael of Nashua, Jacob Dusling and his wife Amy of Londonderry, Jillian Coyne and her husband Matthew of Merrimack; 13 great-grandchildren; her sister, Barbara Carey of Nashua; Sisters-in-law, Virginia Hasting of MA, Eleanor Drew of VT, Esther Ratcliffe of TX & Arlene Smith of KY; also several nieces and nephews. She was sister of the late James Hastings.

SERVICES: According to her wishes, services will be private with interment at the New Hampshire State Veteran’s Cemetery in Boscawen, NH. In lieu of flowers, donations in Betty’s memory may be made to Home & Health Hospice Care, 7 Executive Park Dr., Merrimack, NH 03054 www.hhhc.org. Arrangements in care of the DAVIS FUNERAL HOME, 1 Lock St., Nashua, NH 03064. An online guestbook can be found at www.davisfuneralhomenh.com (603)883-3401 “ONE MEMORY LIGHTS ANOTHER.”