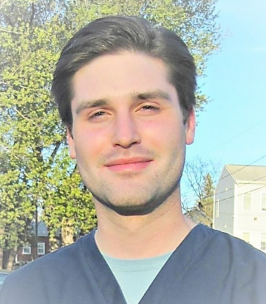 Brendan William Engberg, 28, passed away suddenly on Sunday, August 21, 2022. He was born on January 7, 1994, in Nashua, NH; the firstborn son of Carol Anne Engberg-Efstathiou and Nicholas E. Efstathiou. He was baptized at Saint Christopher’s Church and attended schools in the Nashua school district, graduating in 2012 from Nashua High School South. He was employed at Osco Pharmacy as a pharmacy technician and at Davis Funeral Home where he was working as a funeral assistant and was going to be an apprentice funeral director and embalmer.

Brendan loved reading and music and was a talented artist and musician. As a young child, he learned to read and write early and was eventually identified as a gifted student. A keen observer and caring soul, he was always on the lookout for and ready to defend his friends from any harm or injustice. He played soccer for many years, his father often assistant coaching for his teams and he studied karate for most of his childhood. He always loved listening to music and learned to play guitar easily; he loved animation, video games, comics, and graphic novels, and was skilled at drawing his favorite characters and stories. He was great at cooking and loved to help out with preparing holiday meals or just cooking for others. He enjoyed spending time with his family and gifted them with his humor, his mischievous grin, and his strong hugs. He was always a sensitive, caring person who would go out of his way to help others. Brendan had long battled depression and struggled with a late diagnosis of autism. He was loving, kind, giving, intense, funny, stubborn, and sweet. He was loved.

Brendan was predeceased by his maternal grandfather, John L. Engberg, with whom he had a close relationship and strong bond; spending countless hours talking with and learning from him, eventually helping to care for him as his grandfather’s health was failing, and staying by his side as he passed. He was also predeceased by his paternal great-grandmother, Christina Staples, and his nephew, Oliver Hennessey.