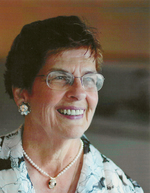 Calliope “Cleo” Barrett (Bacopulos-Nikitas) of Nashua, NH, 83, on July 20 at Community Hospice House in Merrimack, NH with her children at her side. Cleo was born September 27, 1935 in Decatur, Illinois, the daughter of the late Agnes (Johns) Bacopulos of Baroda, Michigan and John Bacopulos of Patras, Greece. Cleo’s family moved to Holyoke, Massachusetts, and she later attended the Burbank School of Nursing in Fitchburg, Mass., becoming an RN and meeting her future husband, Christus Nikitas, after church. They married in 1956, eventually settling in Nashua, and had four children: Michael, John, Matthew and Katherine. Cleo lovingly cared for husband Chris during his fight with cancer and was widowed in 1969. Then with courage and perseverance she raised her four young children, with the support of her extended family and a core group of lifelong friends made in the Marie Avenue neighborhood of Nashua.
She remarried in 1979, to widower Austin Barrett of Hollis, NH, a native of England, who she’d met at a “Parents Without Partners” meeting in Nashua. They shared 25 happy, rewarding years together, traveling and adding new friends. She also gained a daughter, Lynne (Barrett) Marvell. Cleo cared for Austin during his battle with cancer, which ended in 2002.
Cleo loved to golf, read, cook, sing, and most of all unconditionally love her family. She was boundlessly generous with her love and support, a champion letter-writer and gift-giver to her children and grandchildren, and legendary for cooking Greek foods at many family and holiday celebrations centered in her home.
She was a woman of deep faith, a lifelong member of the Greek Orthodox Church, and for 40 years a communicant of St. Philip in Nashua. She prepared and served food at the annual church festivals and was a member of the Agape Society. She was a long-time member of the Nashua Country Club, enjoying regular golf and bridge games.
Cleo was pre-deceased by her brother, the Very Rev. George Bacopulos and her sister, Genevieve Malfas. She leaves behind her son Michael and daughter-in-law Amy Evans of Windham, N.H.; son John and daughter-in-law Mary Nikitas of Clinton, Tennessee; son Matthew and son-in-law Matthew Canton of San Francisco, California; daughter Katherine Nikitas of Bedford, N.H.; daughter Lynne Marvell and son-in-law William Marvell of Rye, N.H.; eight grandchildren: Christus, Alexandra, Zoe, Benjamin, Christus, Amy, Alison and Melissa; five great-grandchildren: namesake Audrey Calliope, McKenna, Will, Carter and Madison; and many nieces, nephews and cousins.
Visiting hours are 5:00 p.m. to 8:00 p.m. Thursday, July 25, at the Davis Funeral Home, 1 Lock Street, Nashua, N.H. A funeral will be held 10:00 a.m. Friday, July 26 at the St. Philip Greek Orthodox Church, 500 West Hollis Street, Nashua. Burial will follow at Edgewood Cemetery, Nashua.
In lieu of flowers, donations may be made to the Nashua Soup Kitchen and Shelter, Community Hospice House of Merrimack or the St. Philip Greek Orthodox Church of Nashua.