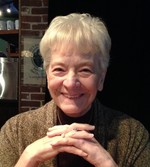 Carol Austin Blodgett, 88, of Nashua, NH, died suddenly of complications from heart disease on February 5, 2022. She was born October 26, 1933, in Sanborn, NY, to parents James and Alice (DeLong) Austin. She was the wife of Donald F. Blodgett, Jr. They were married on October 11, 1958, and celebrated over 52 years of marriage before Don’s passing in January of 2011.

When she was a teenager, Carol’s family moved to Columbia, South Carolina, where she graduated from University High School and was involved in the school chorus. Carol also played the piano and enjoyed the arts.

Carol and Don moved to Nashua in 1966 and raised their four children there. When the children were older, Carol worked at the White Wing School as both a preschool teacher and a music teacher. Carol joined the Nashua Choral Society in 1966 and was a member of the chorus until 2014. The group enjoyed many singing tours abroad, allowing Carol to see many European countries. She later joined the smaller ensemble Colla Voce and had the distinct honor of singing the National Anthem not once, but twice, at Fenway Park for her beloved Red Sox, thus marrying her dual passions for singing and baseball. Carol also sang with the Nashoba Valley Chorale for a number of years. She followed the Red Sox ardently on TV and radio, often calling friends during games to share commentary.

In addition, Carol was an active congregant at St. Luke’s Anglican Church, where she served on the vestry and the altar guild. A lover of words, Carol was an avid reader and enjoyed crossword puzzles, Word Jumbles, and Mad Libs. Several weeks each summer were spent at Seabrook Beach in the company of close friends enjoying the sun and ocean air, watching baseball games, and drinking daiquiris. She was known for her wit and sense of humor, which were often displayed in the limericks she loved to write for others.

Her greatest joys were the company and love of her family and friends, sharing daily conversations with close friends, and marveling at the miracle of God’s creation. Carol was most proud of her four children and five grandchildren and sharing in their happiness and many accomplishments.

SERVICES: A visitation will be held Thursday, February 10, 2022, from 1-3 pm at the Davis Funeral Home, 1 Lock Street, Nashua, NH, 03064. COVID-19 concerns will be addressed by requiring one-way passage though the funeral home, hand sanitation at the door, wearing masks, social distancing, and no physical contact with the family. Healthy family and friends are invited to attend. Interment will happen at a later date. When the weather warms and outdoor gatherings become possible, a funeral mass and celebration of life will take place in Carol’s memory. Family and friends will be notified of details.

In lieu of flowers, memorial contributions in Carol’s honor may be made to St. Luke’s Anglican Church, 3 Limbo Lane, Amherst, NH, the Nashua Symphony Chorus, 6 Church St Nashua, NH, or to Home Health and Hospice Care, 7 Executive Park Drive, Merrimack, NH. The family would like to thank Community Hospice House for the loving and compassionate care given to both Carol and her family in her final days. An online guestbook is available at www.davisfuneralhomenh.com (603)883-3401 “ONE MEMORY LIGHTS ANOTHER.”