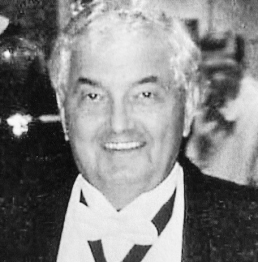 David Richard “Dick” Smith died peacefully in his home after a brief illness surrounded by family. He was 89. Dick was living in Nashua, New Hampshire, and also lived in Madison, Connecticut, Pittsburgh, Pennsylvania, and Venice, Florida for many years.

Dick was born and raised in Radnor, Pennsylvania; the son of the late Charles and Ruth (nee Oyer) Smith and brother to Barbara Ann Wakeman. He graduated from Radnor High School and was admitted with a full scholarship to Yale University, graduating in 1954. There he met his first wife, Lois Baker, who was his supervisor at the Yale library.
Before starting his career he served in the U.S. Army Intelligence stationed in Stuttgart, Germany. When he returned home, he and Lois married and he began his career in corporate finance. He was selected to join J&L Steel’s Executive program in Pittsburgh which included MBA studies at Case Western in Cleveland, Ohio. He and Lois moved to Connecticut in 1962 with their two young sons, and he joined Malleable Iron Fittings in Branford, CT as Treasurer. He later moved on to C.N. Flagg in Meriden, CT as Treasurer. They soon settled in Madison, Connecticut where they raised their four children. Dick was promoted to CFO, a position he held for 20 years. In 1986 he married his second wife, Marilyn Van Strum, and they moved to Pittsburgh where he became the CFO of Hoechstetter Printing. He also served as a board member of C.N. Flagg. He and Marilyn retired in Venice, Florida in 2000.

In addition to his career, Dick had personal interests that ran the creative gamut. He loved choral singing and sang from age 10 to 85. His baritone voice contributed to renowned choruses such as the Yale Glee Club (Dick singing, at 85, with the YGC at Woolsey Hall (https://www.youtube.com/playlist?list=PLJoSpiKyjEJ_EEtViLqauHyYaLRgvrfpq), Yale Alumni Chorus, the New Haven Chorale, the Mendelssohn Choir of the Pittsburgh Symphony Orchestra, Sarasota's Key Chorale, St Mark's Episcopal Church choir, and The First Congregational Church choir of Madison, Connecticut. He shared this passion with his wife, Marilyn, and together they performed in choir and had the joy of performing in France, Luxembourg, Holland, Russia, England, Wales, and New York’s Lincoln Center. Dick also loved photography, calligraphy, and woodcut printing. He was known for his annual Christmas card woodcut prints which included carefully selected psalms that he meticulously calligraphed in black ink.

Dick was a beloved husband, father, brother, grandfather, and great-grandfather. He was extremely proud of his four kids and grandchildren. His outlook on life was influenced by his diehard optimism and curiosity. When invited, he’d tell his favorite jokes. He also enjoyed studying and debating politics, always curious about different positions.

He is predeceased by his wife Marilyn Smith, his sister Barbara Ann Wakeman, and his first wife and mother of his children, Lois Baker Smith. He is survived by his four children; David and wife Jeannie Smith of Westport, Connecticut; Doug and wife Marcia Smith of Bronxville, New York; Liz and husband Ted Barbour of Hollis, New Hampshire; Evans and husband Lorenzo Scala of Ridgewood, New Jersey; ten grandchildren, Tyler, Morgan, and Alie Smith, Haley and Jack Barbour, Luca Scala, Caleb, Nathan, Chloe, and Noah Smith; and two great-grandchildren, Dylan and Wyatt Smith. He is also survived by Marilyn’s children and grandchildren; Kevin and wife Marcellina Van Strum; Jennifer and husband Mark Fontanella and their children, Ruth and Tucker Fontanella.

Services: In the coming weeks, Dick will be remembered at small gatherings with family and friends in New Hampshire and Connecticut. In lieu of flowers, donations may be made to Yale Glee Club Association-(http://yppsweb2.its.yale.edu/gleeclub/fundraising.asp). If you like, have a listen to the Yale choir music that Dick loved so much(https://gleeclub.yalecollege.yale.edu/media/audio-clips). The Davis Funeral Home has been placed in charge of arrangements. (603)883-3401 “ONE MEMORY LIGHTS ANOTHER.”