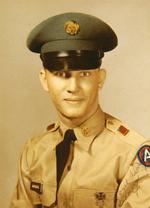 Daniel Marquis 80, passed away on August 11, 2020 at his home after a long courageous battle with several serious medical conditions.

He was born January 6, 1940 to Lucien and Germaine (Bonefant) Marquis. A Nashua native who was always willing to help others. Quite the handyman there was nothing he could not construct nor repair. A devoted, hardworking, father of two, married to the love of his life for 54 years.

Daniel joined the Army at the age of 18, 82nd Airborne Division and later, the Nation Guard. He then worked at Sanders, and Beebie Brothers Auto before becoming an Electron Beam Welder for Ingersol Rand/IMPCO/GL&V/Beloit, until his retirement after 30 years in the field.

His quick wit, dry humor, delicious cooking and his generosity of time, wisdom and care to family, friends, neighbors and strangers alike, will be greatly missed.

He is survived by his wife, Georgia and daughters Beth and her spouse Lance Carreau of Nashua, Jill and her spouse Jay SanSoucie of Nashua along with granddaughters Talia and Gabriella whom he loved “to the moon and back”. A brother Wilfred Marquis is his only surviving sibling.

We love you. Sorry you had to go. This is not goodbye.

SERVICES: A memorial will be held in Daniel's name at the anniversary of his passing. The DAVIS FUNERAL HOME, One Lock St., Nashua has been placed in charge of arrangements. An online guest book is available at www.davisfuneralhomenh.com, (603-883-3401) “ONE MEMORY LIGHTS ANOTHER”.