To share your memory on the wall of David Autote, sign in using one of the following options:

SERVICES: Private services will be held at the convenience of the family. The DAVIS FUNERAL HOME, One Lock St., Nashua has been placed in charge of arrangements. “ONE MEMORY LIGHTS ANOTHER”. (603-883-3401)
Read Less

Donations are being accepted for: Community Hospice House.

We encourage you to share your most beloved memories of David here, so that the family and other loved ones can always see it. You can upload cherished photographs, or share your favorite stories, and can even comment on those shared by others.

Posted Jul 15, 2020 at 12:28pm
My deepest sympathy goes out to the Autote family. Although I did not know Mr. Autote personally, I had the privilege of teaching two of his grandsons, as well as having his dear wife Elaine as a classroom volunteer. From those experiences, I know he was blessed with a beautiful and loving family. I am so sorry for your loss and will keep you all in my thoughts and prayers.

Posted Jul 15, 2020 at 10:06am
I worked with Dave at Atrium and learned very quickly he was a wonderful person. So pleasant and nice to be around. He was missed when he retired. I ran into him at the gas station in Wilton and he was enjoying retirement and seemed very happy. So sorry to hear of this.
Comment Share
Share via:

Posted Jul 15, 2020 at 08:34am
My heartfelt condolences to the entire Autote family. I understand that the last year or so has been difficult but there is always some solace in knowing that our loved ones are not longer suffering and have moved on to be with God and I know that David was welcomed with open arms.
I really enjoyed my time working alongside David during our time at Atrium Medical. David was always hard working and was a joy to work with. He was always bragging about his kids and grandkids and it was clear that he cherished his family more than anything.
My wife, Elizabeth and I, extend our sympathies to you, Elaine, and your kids and granddkids during this emotional time. The Atrium team was a very close knit group who always looked out for each other and I can assure you that there is much love and prayers being sent your way. God Bless you all.

I worked with Dave at Atrium for many years and found him to be a hard working, honest and dedicated engineers. Never seemed driven by ego or pride but merely to honor and respect his peers. I man of integrity who will be remembered as one of the best. I am thrilled that he is saved and that he is with his creator. 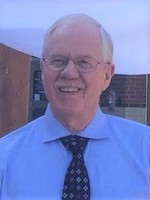