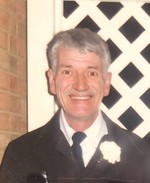 Dennis Harry Grant, 70, passed away from a sudden illness Friday June 10, 2022, at the Elms Center in Milford, NH where he resided, for over a year and a half. Previously, he resided at the Salmon Brook Senior Housing on Lovell Street in Nashua, NH. He was born May 4, 1952, in Manchester to parents David and Rena (White) Grant, whom are deceased.

Dennis attended local schools in the Nashua area growing up. He worked for Memorial Hospital (now known as Southern NH Medical Center) for over 40 years in the housekeeping department. He valued the relationships he made there over the years. He retired in 2014.

Dennis was a member of Trinity Baptist Church in Nashua. He was unable to attend as much in the past few years but treasured his faith. Dennis liked being involved in civic activities and when he was able, he would never miss a local parade. He loved firetrucks and had many model firetrucks that adorned his home. Some of his favorite activities included, watching the Three Stooges and he could recite practically every line while watching. He had a great appreciation of fierce thunderstorms. He was also known for his love of music and singing. The Beatles and Johnny Cash were his favorite.

Dennis was predeceased by his brothers, William and David.

Dennis is survived by his sisters Linda Southwick of Nashville, TN, Sharon Godshall of Harleysville, PA and Cheryl Blakeley and her husband Edward of Greenville, NH. He is also survived by 2 sister-in-laws, nieces, nephews, great nieces, great nephews, and many friends.

The family would like to extend their gratitude to the Elms Center in Milford, NH and Compassus
Hospice in Bedford, NH for the excellent care they gave to Dennis. The staff and residents at the Elms Center will miss him greatly.

SERVICES: A visitation will be held on Thursday, June 23, 2022, from 11 am to 1 pm at the Davis Funeral Home, 1 Lock St, Nashua, NH. A funeral service will take place directly after the visitation at 1 pm. A procession will lead us to Last Rest Cemetery, 7 Hillside Terrace, Merrimack, NH for internment. Friends and family are invited to attend. (603) 883-3401 “ONE MEMORY LIGHTS ANOTHER.”