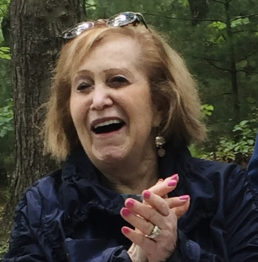 Dotty Silber, of Nashua, NH passed away peacefully on November 22, 2022.

Mrs. Silber was born May 7, 1943, in Brookline, MA, daughter of the late Sophie (Sobel) and Hyman Andler. She was raised in Newton, MA, spending many happy summers in Nantasket Beach, MA.

She was the widow of Allan B. Silber, who died in August, 2003. They had been married for 39 wonderful years.

Dotty was an owner and CFO of Boulder Morty’s, an indoor rock climbing gym, with her son, Ken.

Mrs. Silber was a member of Temple Beth Abraham. She was a Paul Harris Fellow of Rotary International. She had been a member of the St. Joseph Hospital’s committee on women’s community health. She had also served on the boards of directors of the United Way of Greater Nashua and Against All Odds. In addition, Dotty served on the Board of Directors of Nashua’s International Sculpture Symposium, having hosted several sculptors in her home.

Mrs. Silber enjoyed traveling, especially to the small islands of the Caribbean.
She (and her late husband) enjoyed collecting seashells, sea glass, ceramic shards and sea beans. Dotty also had a love for gardening.

For about 3 years, “Dorothy Gail” hosted travelers for Airbnb in her “Wizard of Oz” house. She made some everlasting friendships with people from all over the world.

The accomplishment that she was most proud of was her role of Bubbe to her Grandchildren, and children around the world. Literally turning being a Bubbe into a brand.