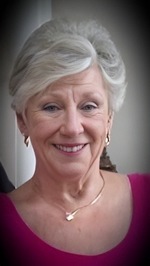 Ellen was born in Malden, MA to the late Robert F. Esty and Lillie Anderson Kolesnik. She lived in Lexington, MA before the family moved to Nashua in 1958, and she graduated from Nashua High School in 1960. She attended John Robert Powers Executive Secretarial school and then worked as an administrative assistant at Technical Operations Inc.(Burlington, MA), where she met her husband George. Ellen and George were married in December 1962, and made Nashua their forever-home.

Prior to being a stay-at-home mother, Ellen worked at Elias Interior Design in Nashua. She joined Norwood Reality in 1984 and became a successful broker for Carlson GMAC Real estate for 22 years.

Ellen was dedicated to the Boys and Girls Club of Greater Nashua and spent 50 years advocating for the youth of the Nashua community. When the Club was in its early stages, Ellen and her friends at the Junior Women’s Club organized a fundraiser to support the new program. From that point forward, Ellen’s volunteerism continued to grow. She held many essential roles in key Club events such as the annual fundraiser holiday auction.

Ellen joined the Boys and Girls Club Board, serving as Secretary and Treasurer initially, and then taking on the role of President in 1988. She was recognized for her commitment with many awards – the first being the Women & Boy Award in 1981. In 2011 she received her 40-years-of-service pin, along with a commendation from then-Governor John Lynch for her dedication to youth and outstanding volunteerism to the Club. She was inducted into the Club’s Hall of Fame in 2013, and in 2016 was the first recipient of the “From the Heart Memorial Award” in memory of the Club’s first CEO, Dominick J. Giovinazzo. Ellen was a leader for the Club’s fundraising initiatives and was most recently recognized in 2021 for her 50th year of service as a Club volunteer.

In addition to her dedicated time with the Boys & Girls Club, Ellen enjoyed visiting relatives in Sweden, general travel with family and friends, and ‘cousinfests’ in warm climates. She loved to entertain, play bridge, and spend time with her four-legged grand-babies.

Ellen is predeceased by her husband George. She is survived by her daughters, Christine Arouchon of Nashua; Julia Richardson and her husband Stephen of Marlborough, MA; her cousins Karin Crivel of OH and Christine Martin of FL; and her extended family members, as well as many dear friends.