To share your memory on the wall of Erwin Ziner, sign in using one of the following options:

He served in the 315th Bo... Read More
NASHUA, N.H. -- Erwin N. “Pete” Ziner, a World War II Army Air Corps veteran who flew in the Last Mission over Japan, and a Massachusetts native, died November 12 after a brief illness. Mr. Ziner was 97.

He served in the 315th Bomb Wing, 20th Army Air Corps in the Pacific Theater, as a First Lieutenant and radar operator.

His wife, Arline R. [Goldstein] Ziner, preceded him in death two years ago. Arline, whom he courted while she served with the U.S. Cadet Nurse Corps at Beth Israel Hospital in Boston, was the love of his life. They celebrated their 70th anniversary at a family party in July 2018. At his nephew Dan’s wedding, Mr. Ziner said the secret to such an enduring marriage was to “marry the right woman.”

“Pete,” as his friends and family knew him, was a graduate of Northeastern University. He enjoyed a long career as a civil engineer. He was an avid golfer and downhill skier, well into his 80s.

He was a radar operator on a B-29 bomber during what was known as “The Last Mission” during WWII, which primarily targeted Japanese oil refineries. While flying back to their base at the island of Guam on August 25, 1945, the crew learned that the Japanese Emperor had surrendered, ending the war. Once they landed, they discovered the aircraft’s tail had been strafed and flak had just missed the propellers. His crew and most of the other B-29s in the Pacific subsequently flew mercy missions that dropped food and clothing to Allied prisoners of war in the region.


Mr. Ziner was an excellent raconteur with an encyclopedic memory, who kept his family’s oral history alive. He frequently told war stories: he remained proud of his military service throughout his life. He recounted such infamous events as the 1942 Cocoanut Grove Fire in Boston; which claimed the life of a relative. He was a devoted football and baseball fan. For years he brought his children to Opening Day at Fenway Park.

Mr. Ziner and his family formerly lived in Woburn, MA; Miami Beach, Fla., and Wayland, Massachusetts. He and Mrs. Ziner moved to Nashua about 20 years ago.

Mr. Ziner leaves his son and daughter-in-law, David and Bette Ziner of Simpsonville, S.C.; his daughter, Karen Lee Ziner, of Providence, R.I., and his sister, Muriel Dane of Longmeadow, MA. His daughter Wendy Ravech preceded him in death. He also leaves his grandson, Dan Ziner, and Dan’s wife, Kelly Ziner, of Johns Island, S.C.; his granddaughter, Beth Linn, of Charlotte, N.C.; two great-grandchildren, Abby and Jackson, and several nieces and nephews. He was the son of the late Jacob and Ida Ziner of Malden, MA.

The family wishes to thank the staff of Langdon Place of Nashua senior living community, where Mr. and Mrs. Ziner received excellent care in their final years.

A private service will be held at a future date. Donations may be sent to the Alzheimer’s Foundation of America at https://alzfdn.org, or the American Cancer Society at www.cancer.org.
Read Less

To send flowers to the family or plant a tree in memory of Erwin Norbert Ziner, please visit our Heartfelt Sympathies Store.

Receive notifications about information and event scheduling for Erwin

We encourage you to share your most beloved memories of Erwin here, so that the family and other loved ones can always see it. You can upload cherished photographs, or share your favorite stories, and can even comment on those shared by others.

Posted Feb 02, 2021 at 07:07pm
The role of the Workman has been called and one of our Brothers has failed to respond. The Supreme Architect has needed another Workman at his side.
Rest In Peace Brother you have served well.
Comment Share
Share via:
KR

Posted Dec 01, 2020 at 02:01pm
My father, Philip Rossetti, worked with Erwin ("Pete") for years at the firm they co-found (Ziner & Rossetti, Inc.). Pete was a trusted business partner, as well as a dear family friend. I will always remember that it was Pete Ziner who taught me a proper golf grip, imploring me to change from the interlocking to the overlaying grip. If it were not for him, God only knows how much worse I would be at golf. From all the Rossettis, please accept our condolences and know you are in our thoughts during this difficult time.
- Kurt Rossetti
Comment Share
Share via:
HS

Posted Nov 25, 2020 at 09:51pm
To Karen and to the Ziner family, my deep sorrow. Pete was a man as strong as the respect he commanded. Most sincerely, Rick Burton

Posted Nov 22, 2020 at 12:44pm
Dear Karen and family:
On behalf of the second-generation 315th Bomb Wing Association, I send along our profound condolences on the passing of your father, who, along with your mother, was a stalwart member of our community for many years and a frequent attendee at our annual reunions, the last one, I think, being 2012 in Washington, DC. Both were among our most gregarious and well liked members and I especially appreciate their welcoming of my own Aunt Mary at the 2009 reunion n Reading, PA. As you all well know, Pete and Arline were both just downright nice and wonderful people and as such, we are all lucky that they lived as long and as well as they did. Naturally, they will be missed, and especially by all of you. And for that, you have our sincerest sympathies. For his wartime service in the 315th Bomb Wing, he has our undying gratitude.

Thank you for such kind words, Marshall. Yes, of course I remember our meeting at the Cornish Horrors!
KZ

Thank you for such kind words, Marshall. Yes, of course I remember our meeting at the Cornish Horrors!
ML

Posted Nov 17, 2020 at 06:46pm
Dave and Bette, Beth and Dan....thinking of all of you as you grieve the passing of the family patriarch....he sounds like a most amazing gentleman! Mary Lynch, Rick Whittlesey and families. 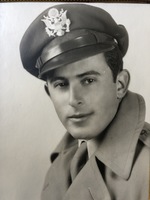