To share your memory on the wall of Estelle Demanche, sign in using one of the following options:

Services: Services will be postponed until a date can be established. Those who wish to make a memorial donation in Estelle’s loving memory, may do so to the Alzheimer’s Foundation of America, 322 Eighth Avenue 7th FL, New York, NY. 10001, or visit them online at alzfdn.org The Davis Funeral Home, 1 Lock St., Nashua NH., has been placed in charge of arrangements. (603)883-3401 “ONE MEMORY LIGHTS ANOTHER.”
Read Less

Receive notifications about information and event scheduling for Estelle

Donations are being accepted for: ALZHEIMERS FOUNDATION OF AMERICA INC.

We encourage you to share your most beloved memories of Estelle here, so that the family and other loved ones can always see it. You can upload cherished photographs, or share your favorite stories, and can even comment on those shared by others.

Posted Apr 13, 2020 at 06:51pm
To Estelle family,
I will miss my Memere. She always made me laugh everyday. Especially when you ask her how are you feeling today, she would say “sick in bed “ then laugh. I will miss all her wonderful stories about her family. R.I. P my Memere until we meet again. I love you ❤️❤️
Comment Share
Share via:

Posted Apr 11, 2020 at 01:08pm
Will never forget working with Estelle at Howdy Beefburgers ! She was the best grill person ever ! Her humour was the best !
Comment Share
Share via:
A

She would talk about that place to me. She thought she was still working there from this day. I loved listening to her stories about Howdy. 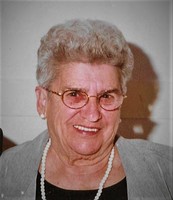