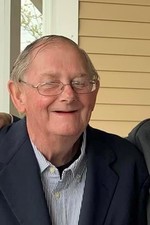 Prior to his retirement, he worked at the family business all of his working years at Coombs Auto Salvage in Pelham, performing various duties over the years.

Fred enjoyed time with his nieces & nephews and his extended family.

He is survived by his sisters-in-law, Joyce Coombs, with whom he resided in Pelham, and Pauline Green of Derry; his girlfriend, Carol Ralston; he also leaves eight nieces and six nephews; and numerous grand-nieces & grand-nephews; a large extended family, and many friends. He was brother of the late Ralph Coombs and Norman Coombs, Sr..

SERVICES: Relatives & friends are invited to his Visitation and Funeral Service at the DAVIS FUNERAL HOME, 1 Lock St., Nashua, NH 03064 on Thursday June 23, 2022 from 10:00 AM until 12:00 PM. A prayer service will take place in the funeral home at 12-Noon led by Rev. Doug Rickard. Interment to follow at Gibson Cemetery in Pelham. An online guestbook can be found at www.davisfuneralhomenh.com (603)883-3401 “ONE MEMORY LIGHTS ANOTHER.”