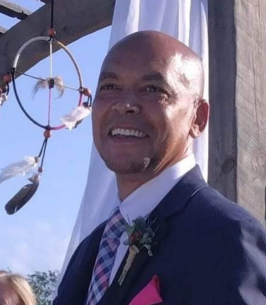 George D. Clements, Jr., age 56, of Nashua, NH, formerly of Boston, MA and North Carolina, passed away unexpectedly at home on Aug. 24, 2022. For 14 years, he was the beloved husband and partner of Meagan (Swanson) Clements.

He was born in Boston on December 14, 1965, son of the late George D. Clements, Sr. and Tina (Skelly) Clements of Knightdale, North Carolina.

George completed his primary and secondary education in Boston, MA before moving to North Carolina.

George always said his greatest achievement was being a Dad. A devoted husband, father, and uncle, he made sure he was always available to his children, nieces, and nephews, whether it be a kind word, basketball lessons, a shoulder to cry on, or providing advice.

In his free time George loved everything basketball. He was a die-hard Celtics fan and could often be heard yelling at the TV whenever they played. I am sure he will continue his sideline coaching from heaven with his late brother, Derek Clements whom he often told stories about and missed dearly.

Mr. Clements was an active member of the Main Street United Methodist Church in Nashua, where he assisted and participated in many church functions and activities. He was known throughout the community as a man that could be called on at any time for anything and respected dearly.

Besides his loving wife, Meagan, and his mother, Tina, George is survived by his children, Kennedy Clements and George “Tre” Clements, III; his Sister, Shayna Clements; his in-laws, Kent & Donna Swanson, of Nashua; and several nieces and nephews he loved like his own children.