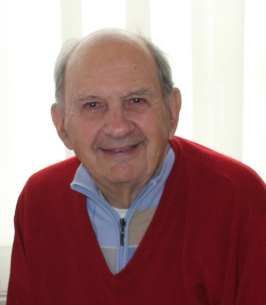 George Lawrence “Larry” Gettings, Jr., age 87, of Nashua, NH, formerly of Brookline, MA, passed away peacefully at home on September 16, 2022. For 59 years, he was the beloved husband of Anne Marion (Day) Gettings.

He was born in Boston on March 18, 1935, son of the late George Lawrence Gettings, Sr. and the late Katherine (Miller) Gettings. He attended the Heath School in Brookline, MA, then St. John’s Prep. in Danvers, and Providence College where he earned a BS in Business.

He enlisted in the US Marines and completed basic training in 1957 and was transferred to the reserves where he attained the rank of 1st Lieutenant.

Prior to his retirement, he worked as a systems analyst for many years, having worked at Raytheon, ITEK and Sanders Assoc. After working with computers, he was an entrepreneur running his own businesses primarily selling camp lots in northern New Hampshire, owning and maintaining an office on Cooper Hill in Colebrook, and still own property in Colebrook (Reed Road), Stewartstown (Diamond Pond), Columbia (South Jordan Hill), Clarkesville (Baldwin Rd), Groveton, Granby Vermont. It had been the Lancaster County Fair that brought him to Northern New Hampshire in the 1970’s.

Larry enjoyed exploring the woods, chestnut reclamation, archaeology, and history. He was a member of the Ancient and Honorable Artillery Company of Massachusetts (AHAC), a fraternal organization charged in preserving the historic and patriotic traditions of Boston and the Nation. He was a member of the Knights of Malta, which focuses on providing humanitarian assistance and healing. He also enjoyed playing golf, bridge, travelling, swimming, and, especially, spending time with his family.

Besides his wife, Anne, Larry is survived by his two sons, Andrew “Andy” Gettings and his wife, Karen, of Carlisle, MA, Myles Gettings of Bedford, NH; five beloved grandchildren, Jacob, Luke, Shannon, Erica and Ben; also several nieces & nephews; he was preceded in death by his sister, Patricia and his brother, John.

SERVICES: Relatives & friends are invited to his visitation at the DAVIS FUNERAL HOME, One Lock St., Nashua, NH 03064 on Friday Sept. 23, 2022 from 4:00 until 7:00 PM. Funeral Saturday Sept. 24 with a Funeral Service in the funeral home at 10:00 am. Interment to follow at St. Stanislaus Cemetery, Nashua. An online guestbook can be found at www.davisfuneralhomenh.com (603)883-3401 “ONE MEMORY LIGHTS ANOTHER.”