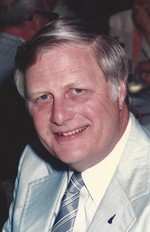 George grew up an only child in Wollaston, MA. In his youth he worked at the original Howard Johnson’s on Beale Street in Wollaston and in watch and clock repair at a friend’s shop in the Jeweler’s Building in Boston. He was on the track team at North Quincy High School, where he graduated in 1950. George enlisted in the Air Force in 1951, serving for 4 years of active and 4 years of reserve duty. Active duty included stints in Florida, England and Morocco, where he spoke fluent French while working in air traffic control.

He met his wife Janet while on leave from duty in Florida and they courted while he completed his active duty and began working with the Federal Aviation Administration in Louisville, Kentucky. They were married on April 27, 1957 in Wollaston, MA. Later they returned from Kentucky to live in Wollaston while George worked at the control tower at Logan Airport in Boston. In 1963 they moved to Nashua, NH where he worked with the Federal Aviation Administration as an air traffic controller at the newly-opened Boston Center, located in Nashua. He retired from the FAA in 1986.

George was a Freemason for over 50 years, receiving its highest honor of 33rd Degree Scottish Rite Mason in 1977. He was a Past Master of Rising Sun Lodge #39 in Nashua and a Past Grand Master of NH Grand Lodge. He and Janet enjoyed numerous trips throughout the United States and to England with various Masonic groups and they always treasured those experiences and especially the friends they made through Masonry.

George enjoyed gathering with friends and family, vegetable gardening, stamp and coin collecting, floating in the ocean on Cape Cod, air shows, planes and almost anything to do with aviation. He also enjoyed following the local professional sports teams: the Patriots, Red Sox, Bruins and Celtics, and watching professional golf, as well as attending numerous games and tournaments over the years.

SERVICES: Services are private for immediate family. A Celebration of Life will be held at a later date. In lieu of flowers, memorial contributions in George’s honor may be made to the DAV (Disabled American Veterans) Charitable Service Trust in Erlanger, KY, The Scottish Rite Hospitaler Fund, 196 Main St., Nashua, NH, or the Nashua Humane Society. Arrangements in the care of the DAVIS FUNERAL HOME, One Lock St., Nashua, NH 03064. An online guestbook is available at www.davisfuneralhomenh.com (603) 883-3401. "ONE MEMORY LIGHTS ANOTHER."