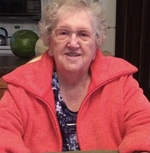 Helen F (Cassidy) McFadden, 98, died Sunday, December 6th, 2020 at Greenbrier Nursing Home in Nashua, NH. She was born on July 24,1922 in Lowell, MA, the daughter of Frederick and Vera Cassidy.

She was the wife of Peter McFadden. They were married on December 2, 1942 in Washington D.C.

She went to high school in Lowell, Ma., and went on to take a course in Secretarial work in Washington D.C.

Helen loved to garden and was once the President of the Nashua Garden Club. She encouraged members to learn about horticulture, landscape design, floral design, and the civic beautification of the community at large. She was also an active member of the Nashua Senior Center Silver Lining Chorus. Helen enjoyed the weekly meetings and staying in touch with her community.

Helen is predeceased by beloved husband, Peter McFadden Sr. and her son Peter McFadden Jr.
She is survived by her children, Nancy Davidson and her husband Charles of Fl., her son David McFadden and his wife Tamara of GA., her daughter Susan Pfeiffer and her husband Ken of Nashua, NH, and her daughter in-law Anne Siteman of NH. She is also survived by grandchildren; Alicia Thomas, Michael McFadden, Mark McFadden, Keith Davidson, Eric Davidson, Chelsea Harding, Adam Harding, Courtney Poppinga, Shelly McFadden, and numerous great-grandchildren.

SERVICES: A Funeral Service will be held at the Davis Funeral Home, 1 Lock St., Nashua, NH, on Wednesday, December 16, 2020 at 11 am. Family and friends are invited with masks and social distancing protocol observed. A procession will be held directly after the service to St. Patrick’s Cemetery, 1251 Gorham St, Lowell, MA., where a committal service will be officiated by Father Dion. The DAVIS FUNERAL HOME, One Lock St., Nashua has been placed in charge of arrangements. (603-883-3401) “ONE MEMORY LIGHTS ANOTHER”.