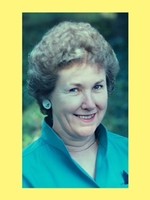 Janet (Austin) Van Dyke, 91, of Bedford, NH, formerly of Nashua, NH, passed away peacefully on February 22, 2022, after a period of declining health. She was born in Boston on March 11, 1930, to parents Walter A. Austin, Jr. and Madeline (Godfrey) Austin. She was the beloved wife of the late George D. Van Dyke for 64 years, until his recent passing.

Janet grew up an only child in Wollaston, MA. In her youth, she spent much time with numerous cousins and with her beloved Nana Godfrey. She shared an enthusiasm for sports with her father, who taught her to ski and took her to watch baseball games with him. She loved to dance and was part of a troupe that once performed at a local USO Club during World War II.

She graduated from North Quincy High School in 1948 and attended Kathleen Dell Business School, where she worked for the school newspaper and graduated in 1950. Janet subsequently found employment as a receptionist at the investment firm of Eaton and Howard in Boston and would travel there on the train with her father, who also worked in the city. Often after work she enjoyed meeting friends to attend Red Sox games at Fenway Park where they would sit in the bleachers and watch her beloved Ted Williams play.

In the mid 1950’s, Janet and her husband George were first introduced by their mothers, who had become friends. They were married on April 27, 1957 and honeymooned in Colonial Williamsburg, VA. They lived briefly in Louisville, KY but soon returned to Wollaston and began raising a family. George’s work with the Federal Aviation Administration took them to Nashua, NH in 1963, where they lived for 58 years.

While in NH, Janet made dear friends in her neighborhood and through her children’s activities. She enjoyed numerous social events and travel throughout the U.S. and to England with friends that she and George met through his involvement in Freemasonry. She volunteered for over 30 years at Southern NH Medical Center as a messenger and a transporter, escorting patients to testing labs or out of the hospital upon their discharge.

Janet took pride in her homemaker role, running the household for her husband and children. She was well known for sending friends and family greeting cards for every occasion and holiday. She loved yellow roses, listening to music, watching backyard birds, poking around in gift shops and vacationing on Cape Cod. She was an immensely loving and giving person to the end, even trying to take care of the other residents in her memory care facility in her last months.

In lieu of flowers, memorial contributions in Janet’s memory may be made to the Colonial Williamsburg Foundation, (www.colonialwilliamsburg.org or Tel.1-888-CWF-1776), the Strawbery Banke Museum in Portsmouth, NH, (www.strawberybanke.org or Tel. 603-433-1100) or the Humane Society for Greater Nashua,(www.hsfn.org or Tel. 603-889-2275).

Services: A private burial will take place at Blue Hill Cemetery in Braintree, MA. A celebration of life will take place at a later date. The Davis Funeral Home has been placed in charge of arrangements. (603)883-3401 “ONE MEMORY LIGHTS ANOTHER.”