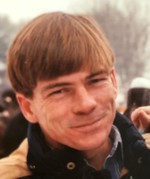 Jay spent his formative years in Nashua and he was a 1979 graduate of Nashua High School. He left Nashua in 2003, moving to Cobbetts Pond in Windham. He was a great neighbor to many elderly people in the community, dropping in daily to check on them while bringing joy and laughter. Before his health issues, he would be the first to lend a helping hand to those in need. Jay’s pride and joy in his life were his two grandchildren, Darius and Geneva.

Jay was a 4th generation master carpenter. He was also very mechanically inclined and enjoying repairing everything from automobiles to appliances in his pastime.

SERVICES: Visitation will be held on Monday, August 26, 2019, from 6-8pm at Davis Funeral Home, One Lock Street in Nashua. A Graveside Committal Service will be at New Plains Cemetery on Ministerial Road in Windham on Tuesday, August 27, 2019 at 12 noon. Family and friends are respectfully invited to attend.