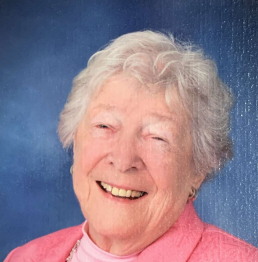 Jeanne G. Helmstetter, 95 years young, of Nashua, NH and formerly of Seven Lakes, NC and Warren Township, NJ, passed away peacefully on Saturday, November 12, 2022 with her daughter by her side at Community Hospice House in Merrimack, NH.

Jeanne was the oldest of three daughters born to Robert Durand and Kathryn Bennett Gildersleeve. She was a 1944 graduate of North Plainfield (NJ) High School. She earned a B.S. in Business Administration from Rutgers University in 1978.

Jeanne was married to Philip A. Kuhlthau in 1947 and they moved to Warren Township. She was twice elected Township Clerk in Warren Township, NJ, a position she held from 1964 to 1978. She served as the Township’s first Town Administrator for another year. Her next position was on the Executive Staff of the New Jersey State League of Municipalities in Trenton, NJ from 1978 to 1983.

Jeanne married Arthur Helmstetter, Sr. on August 3, 1979, and they relocated from Warren, NJ to Seven Lakes, NC in 1983 to get away from snow and to play golf year-round. She and Art traveled often and played golf from NC to the Florida Keys and for several years spent the month of January in Ft. Myers, Florida.

She was an active member of St. Mary Magdalene Episcopal Church in Seven Lakes, NC where she served on the Altar Guild and was a Eucharistic Visitor and participant in the weekly Healing Service. She volunteered at the Episcopal Thrift Shop, she taught basket weaving classes and found time for lots of golf and bridge. In her eighties she learned to play the saxophone with the New Horizons Band. Jeanne and Art loved golf and were active members of Beacon Ridge CC. Other hobbies were counted cross stitch, reading and walking.

After Jeanne had lived in NC for several years her two sisters moved to Seven Lakes too. Some great family times were held before both sisters died.

She moved to Nashua, NH in 2014 to be near her daughter and family. She enjoyed spending time with family (especially her great-grandchildren), playing bridge and finding a wonderful selection of books at the library at the Nashua Senior Center. She was a communicant of the Church of The Good Shepherd where she served on the Altar Guild. She was a member of the Nashaway Women’s Club and the Nashua Senior Center where she met new bridge friends.

She was predeceased by her parents, her husband, Arthur Helmstetter in 2006, her son, Bruce D. Kuhlthau in 2010, her sisters, Doris Miller and Virginia Garman and her ex-husband, Philip A. Kuhlthau.

The funeral service will be held at Church of the Good Shepherd Episcopal Church in Nashua on Monday, November 28, 2022 at 10am. A reception will follow at the Church Hall. As per her wishes, her ashes will be spread near her late husband’s ashes in NJ.