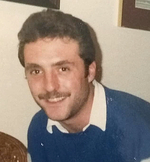 Keith Stuart Jones, 56, of Manchester, formerly of Nashua, passed away on Friday, July 19, 2019 peacefully at home.
Keith was born in Sudbury MA, on December 23, 1962, son of the late Arthur M. Jones and Patricia J. Jones. He was raised and educated in Nashua, graduating from Nashua High School in 1981. He proudly served his country in the United States Army from 1982 to 1986. He then served in the United States Army Reserve from 1986 to 1996.
Keith held many varied and interesting jobs ranging from Auto Mechanic to driving long haul tractor trailers all over the country. His last position was at Lowe’s Home Store in Amherst. Keith could fix and put together almost anything and was always available to help someone in need.
Keith was an animal lover as well as an avid sports fan of NASCAR, the Boston Red Sox and the New England Patriots.
He is survived by his brother, Kenneth, of Manchester; his step-father, Frank Jager of Nashua; his step-sister, Patrice Signorelli and her husband John Signorelli of Foxboro, MA; his nieces, Nicole and Christina Signorelli of Foxboro, MA; his long-time friend, Ed Howard of Manchester; and his beloved canine friend “Howie”.
SERVICES: A Memorial Service will be held Thursday, July 25, 2019, 11am, at Davis Funeral Home, One Lock Street in Nashua. Family and Friends are respectfully invited to attend. Interment will be held privately. In lieu of flowers memorial contributions in the honor of Keith may be made to The Animal Rescue League of New Hampshire, 545 NH-101 Bedford NH 03110.