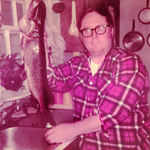 He was the husband of the late Judy Ann Hudson. They were married on January 22,1966 in Hudson, NH

Kenneth served his country honorably in the Navy for 24 years. He performed the duties of a Chief Cryptological Technician and was trusted with national secrets. Once he retired from the Navy, he began an equally lengthy career at BAE Sanders in Nashua.
Kenneth belonged to the VFW, and The Naval Cryptologic Veterans Association of New England, but his most recent affiliation was as a member of R.O.M.E.O.S (Retired Old Men Eating Out at Suzie’s). They enjoyed Suzie’s Diner in Hudson weekly.
Besides being devoted to his country and family, Kenneth enjoyed the great outdoors. He was an excellent hunter, loved to fish, and golfed when he could.
Kenneth is predeceased by his brothers Robert Anthony Hudson, James David Hudson, William Edward Hudson, and his sister Mary Ellen Austin.
He is survived by his son, Andrew Joseph Hudson of Hudson N.H., his daughter Jane and her husband Bob Russell of Hudson, N.H.,his sister Janet Kotowicz and her husband Joseph, his brother Don Hudson and his wife Charlotte, brother Richard Hudson and his wife Sandy, all of Michigan. His close cousin Betty Wuth of South Carolina, and many nieces and nephews.

SERVICES: There will be a private ceremony held at the convenience of the family.
Those who wish may make a memorial contribution in Kenneth’s loving memory, may do so to the Dana-Farber Cancer Institute or to the Jimmy Fund The DAVIS FUNERAL HOME, One Lock St., Nashua has been placed in charge of arrangements. An online guest book is available at www.davisfuneralhomenh.com, (603-883-3401) “ONE MEMORY LIGHTS ANOTHER”.