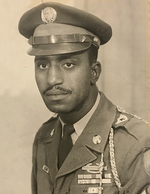 He was the beloved husband of Vivian (Briggs) Nash. They were married on November 4, 1965 in Tacoma, WA.

Lazel was a Master Sargent in the U.S. Army, having served from 1951 through September 1990. He worked for the VA and at the age of 70 obtained his Nursing Certification from Rivier College in Nashua.

He was a previous president of NARFE. In his spare time Lazel enjoyed singing in chorus, golf, bowling, and reading. He also loved jazz music.

He was predeceased by his parents’, his brother, Thomas Nash, and sister, Esther Nash.

SERVICES: Visitation will be at Community Chapel, 5 St. Laurent Street in Nashua on Tuesday, November 26, 2019 from 10am to 11:30am. A Funeral Service will follow visitation, 11:30am, at Community Chapel. Interment and Military Honors will be at NH State Veteran’s Cemetery, 110 Daniel Webster Highway in Boscawen on Tuesday at 2pm. Family and friends are respectfully invited to attend. The DAVIS FUNERAL HOME, One Lock St., Nashua has been placed in charge of arrangements. An online guest book is available at www.davisfuneralhomenh.com, (603-883-3401) “ONE MEMORY LIGHTS ANOTHER”.