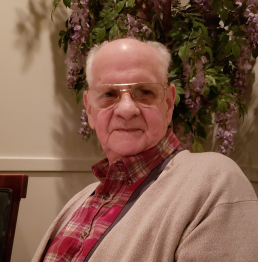 Leonard Clark Williams, 88, of Nashua, NH passed away on February 28, 2022, in Manchester. He was born in Nashua, NH on September 29, 1933, to the late Earl F. Williams and Elizabeth (Cushing) Williams. He was the loving husband of Janine (Soucy) Williams for 34 years. They were married in Nashua on September 5, 1955.

Leonard grew up and attended school in Nashua. He was drafted into the United States Army twice during the Vietnam War era. Most of Leonard’s time was spent stationed in Germany and state-side at Fort Bragg. Most of his adult life was spent as a supervisor at Doehla’s Greeting Cards based in Nashua.

Leonard enjoyed bowling and playing cards, specifically deuces and jacks. He enjoyed playing nickel and dime poker with his children. He also had a great sense of humor and loved telling jokes. Leonard enjoyed spending his weekends puttering around the house, fixing small things, and playing piano which, he taught himself. Most of all he enjoyed spending time with his beloved family. Each day was never complete without having his chocolate ice cream.

Aside from his parents and wife, Leonard is predeceased by his son, Michael Williams, and 4 sisters: Marion Britton, Pearl Tenney, Madeline Dionne, and Mildred Quigley.

He is survived by his three children: Leonard C. Williams Jr. and his wife Catherine, Diane (Williams) Tkacz and her husband Michael “TK”, and Pamela (Williams) Gaffney and her husband Brian. He also leaves behind his grandchildren: Eva, Miranda, Michael, Josh, Derek, Timothy, and Melissa-Janine. Survivors also include his great-grandchildren: Elijah, Samuel, Clark, Hunter, Khiara-Nayeli, Katara-Rayen, Kaia-Anevay, Zaylee, and Aaliyah.

SERVICES: Visitation will be held from 6-8 PM on Thursday March 3, 2022, at Davis Funeral Home, 1 Lock St., Nashua, NH 03064. A funeral mass will follow on Friday March 4, 2022, at 9 AM at St. Patrick’s Church, 29 Spring St., Nashua, NH 03060. Committal prayers and interment will immediately follow at St. Louis Cemetery, 752 W. Hollis St., Nashua, NH 03062, Family and friends are invited to attend. An online guestbook is available at www.davisfuneralhomenh.com. “ONE MEMORY LIGHTS ANOTHER”