To share your memory on the wall of Merton Rolfe, sign in using one of the following options:

He was the husband of his high school sweetheart He... Read More
Merton Alden Rolfe age 89 died Tuesday July 28, 2020 at Fairview Nursing Home in Hudson NH.
He was born October 5, 1930 in Nashua, NH son of the late Hiram Rolfe and Halga Hanson.

He was the husband of his high school sweetheart Herberta Mildred Brown. They were married on October 14, 1951 in Nashua, NH.

Merton was a Graduate of Nashua Senior High School. He was employed for 38 years at JF McElwain and was part owner with his family of McDonald’s Kitchenware Store in downtown Nashua NH

Mert enjoyed construction work of all types. He was very meticulous and detailed in all his work. Mert built the family home in 1960 with his brothers. He shared this love with his youngest daughter and taught her much about construction throughout his life.

In his younger years, Mert enjoyed hunting and fishing. He and his family spent time at their camp in Dunstable, Massachusetts where Mert would fish on the pond, swim with family, enjoy BBQs, and simply being with his family. He also enjoyed playing ping pong with friends and family.

Mert enjoyed Boston Sports Teams including the Bruins, Red Sox, Celtics, and Patriots. You could always find him wearing a team cap.

He never missed his daughter Sarah’s games, whether she was playing ice hockey, volleyball, basketball, or softball or coaching middle and high school teams.

For the final seven years of his life, Mert spent time with his extended family at Fairview Nursing Home in Hudson. The family would like to thank all of the nursing and LNA staff who made his time at Fairview happy. The care he received comforted his daughters. The family would like to extend special gratitude to the activity staff who kept Mert engaged over the years: James, Eleanor, Cheryl, and Terry as well as others.

Mert was predeceased by his wife of 64 years Herberta, sister Thelma, and his brothers Donald and Leonard.

He is survived by three daughters, Susan Derderian and her husband Harry, Sally and Sarah Rolfe all of Nashua NH; one Granddaughter Stacie Poirier and her husband Jason of Dracut, Massachusetts; one Great-grandson Jake Poirier; his cousins, and his favorite visitor, his granddog Sadie.

SERVICES: A walk through visitation will be held on 11:00 am on Friday July 31, 2020 at Davis Funeral Home, 1 Lock st., Nashua, NH 03064 with a brief funeral service to follow at 12:00 pm at the funeral home. Family and friends are respectfully invited to attend. A Private burial will follow at Edgewood Cemetery, 107 Amherst st., Nashua, NH 03064. Those who wish may make a memorial contribution can do so to the Alzheimer’s Association, 225 N. Michigan Ave., Fl. 17, Chicago, IL 60601. Due to COVID restrictions all guests entering the funeral home will be required to wear facemasks and practice social distancing. “ONE MEMORY LIGHTS ANOTHER”.

To send flowers to the family or plant a tree in memory of Merton Alden Rolfe, please visit our Heartfelt Sympathies Store.

Receive notifications about information and event scheduling for Merton

We encourage you to share your most beloved memories of Merton here, so that the family and other loved ones can always see it. You can upload cherished photographs, or share your favorite stories, and can even comment on those shared by others. 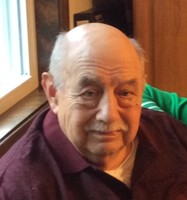