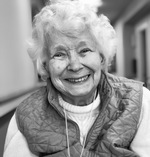 Nancy was born on July 30, 1934 in Nashua, the daughter of the late Francis A. and Leona Collins. She was the widow of William H. Barry, Jr. Nancy was a member of the Nashua High Class of 1952. She graduated from Rivier College in 1956 with a degree in Education. Upon graduation, she taught at Fairgrounds Elementary School. After her marriage, she taught at St. Christopher School for a couple of years at the request of the parish priest. After raising her family, she returned to teaching first grade at Birch Hill Elementary School where she taught hundreds of children how to read. Nancy retired in 1995. If you are able to read this obituary, thank a teacher.

Nancy volunteered at a number of social service agencies and non-profits including numerous committees for the Parish of Resurrection Church, Voice of the Faithful, Nashua Police Neighborhood Watch Group, the Nashua Retired Teachers’ Association, and the League of Women Voters. She prepared and served weekly meals for a number of years at the Nashua Soup Kitchen at its beginnings with “Mrs. McCann’s Group.”

Nancy’s love and devotion to education continued long after her retirement as she was involved with ADK, an international honorary organization for women educators, until her health no longer allowed her to participate. Nancy’s family is so grateful to her ADK sisters who stayed in touch with her, the “Lunch Bunch” gals, who continued to visit and share pizza whenever they could, and to Judy Gregoire and Nicole McBride, devoted caregivers who made Nancy’s last years so much better.

Nancy was the devoted mother of William H. Barry III and his wife, Helen Honorow, of Nashua; Julia (Barry) Vozella and her husband, Joseph A. Vozella III, of Chapel Hill, North Carolina; and Maura (Barry) McIntyre, of Nashua, New Hampshire. She is survived by six grandchildren who meant the world to her – Elizabeth Vozella, Jack Vozella, Kelly McIntyre, Samuel McIntyre, Ariel Barry, and Will Barry. She loved her family tremendously, and it was returned tenfold. Her death comes one day after what would have been her 62nd wedding anniversary to her dear “Will-o”. Nancy is survived by one sister, Gale Arnott, of Hockessin, Delaware, and by many nieces and nephews. She was predeceased by her brother, Francis A. “Bud” Collins, Jr., of Nashua, and her sister, Joan Leah, of Moody Beach, Maine.

SERVICES: Services will be held privately. Interment will be at St. Patrick Cemetery in Hudson. Those planning an expression of sympathy are asked to consider a donation to: Mount Pleasant Family Assistance Fund, 10 Manchester Street, Nashua, NH 03064 or Nashua Soup Kitchen & Shelter, 2 Quincy Street, Nashua, NH 03060.