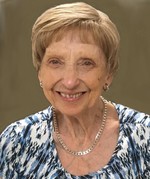 Pauline (Pelletier) Atkinson of Nashua, NH passed away on June 1, 2022 after a period of declining health. She was the widow of Raymond Atkinson, with whom she shared 59 years of marriage prior to his passing in 2019.

She was born February 28, 1935 in Fitchburg, MA, daughter of the late Victor and Anna (Thibodeau) Pelletier. Pauline was a graduate of St. Bernard’s High School, Fitchburg, MA, class of 1954.

Previously employed in the Contract Dept by the former Independent Lock Co. of Fitchburg, she also worked in various positions at Raytheon, Wingate’s Pharmacy, and Nashua Corporation. After her retirement from full-time work, she was a substitute monitor for the Nashua School system.

She was a member of the Parish of the Resurrection in Nashua. She enjoyed dancing, music, reading, and browsing on her computer so she could learn something new every day. Pauline also enjoyed cooking for and spending time with her family. She spent her winter months in Florida with her daughter Lisa, son-in-law Steve and as a doting grandmother to her 2 grandchildren.

She is survived by her son Richard (Rick), with whom she made her home with recently; 2 daughters, Trice Atkinson of Nashua and Lisa Lavoie and her husband Steve of Leesburg, FL as well as 2 grandchildren. She is also survived by 3 sisters, a brother, and a brother-in-law: Lucille Pelletier, Janet Isabelle, Connie McGregor, Robert Pelletier, and Brother Lawrence Atkinson, CSC, as well as numerous nieces and nephews. She was predeceased by 3 sisters and 2 brothers: Doris Zeliski, Yvette Poitras, Theresa Isabelle, Norman Pelletier, and Louis Pelletier.

Her beloved family was the most important thing to her, as she gave her whole heart to them and considered this to be her greatest legacy. Her cherished role in life was devoting her love, support, kindness, and prayers to all those she cared about. She was loved by so many for her compassionate, generous, sweet spirit.

SERVICES: A memorial service and interment will be at a later date at the convenience of the family. In lieu of flowers, donations can be made in her memory to the Make-A-Wish Foundation www.wish.org/donate, or a charity of your choice. The DAVIS FUNERAL HOME, 1 Lock St., Nashua, NH is in charge of arrangements. An online guestbook can be found at www.davisfuneralhomenh.com (603)883-3401 “ONE MEMORY LIGHTS ANOTHER.”