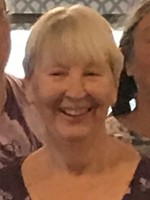 Pauline Jeannette Piche’, 86 of Nashua, NH died Thursday July 18, 2019 at Southern NH Medical Center surrounded by her loved ones.
She was born May 25, 1933 in Dracut, MA daughter of the late Joseph and Marie (Jette) Lachapelle and widow of Joseph A. Piche’ who died on May 14, 1999 and with whom she married at St. Jeanne Baptist Church in Lowell, MA on June 6, 1953. She was also predeceased by 2 brothers, Roland and George Lachapelle and 4 sisters, Noella Clermont, Claire Hebert, Estelle Maloney and Violet Plourde, and godchild Diane Paquette.
Prior to retirement, Pauline was employed with Digital Equipment Corp.
Pauline was independent up until her death, which is what she had wished and she was much loved by her family and friends. She was the recipient of the 10 Gallon Plaque for Blood Donation. She enjoyed solving puzzles of all kinds as well as playing cards, board games and watching Jeopardy.
Survivors include 4 children, Anne Piche’ of Truxton, NY, Mike Piche’ and his wife Holly of Henniker NH, David Piche’ and his wife Susan of South Berwick, ME and Steven Piche’ and his wife Linda of Nashua, NH; 8 grandchildren, 10 great grandchildren as well as many nieces and nephews.
SERVICES: Per Pauline’s request, there will be no visitation or funeral service. The Davis Funeral Home, 1 Lock St., Nashua, NH 03064 is in charge of arrangements. In lieu of flowers, donations may be made in Pauline’s loving memory to: American Red Cross of Greater Nashua Chapter, 28 Concord St., Nashua, NH 03064 or to American Heart Association, Founder’s Affiliate, P.O. Box 417005, Boston, MA 02241-7005. (603) 883-3401. “ONE MEMORY LIGHTS ANOTHER”.