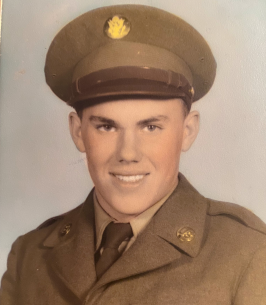 Richard M. Northrup, age 92, of Nashua NH, passed away on August 13, 2022, surrounded by his family and friends. For nearly 70 years, he was the beloved husband of Patricia A. “Patty” (Boyle) Northrup.

He was born in Litchfield, PA on Aug. 11, 1930, son of the late George & Helen (Miller) Northrup. He received a bachelor’s degree in Electrical Engineering from the University of Illinois. Richard served in the US Army from 1948 until his honorable discharge in 1952 during the Korean Conflict.

He loved keeping busy and was passionate about his career. Richard didn't retire until his early 80's. Prior to his retirement in 2012, he designed airport approach runway lighting that is still in use today. He worked for Strobe Approach Lighting Technology of Nashua for many years (formerly known as Flash Technology Co.)

Richard enjoyed scuba diving, photography, mountain climbing, rock climbing, and traveling in his younger years. Post retirement he always stayed busy between numerous projects from renovating the house, researching, bird watching, to reading and solving crossword puzzles. He kept track of everything including a daily weather log up until his death. He was a very handy man, and was known for his many projects that include designing the blueprints for the home they would welcome multiple generations into. Richard planned every detail of their property down the stone walls that surround the property lines.

SERVICES: Relatives & friends are invited to his Memorial Visitation and Service at the DAVIS FUNERAL HOME, One Lock St., Nashua, NH 03064 on Saturday Aug. 20, 2022 from 12:00 until 2:00 PM. A prayer service will take place at 2:00 pm to conclude visitation. A private interment will take place at Woodstock Cemetery. IN LIEU OF FLOWERS, donations in his memory may be made to St. Jude Children’s Research Hospital www.StJude.org/Donate OR a charity of one’s choice. An online guestbook can be found at www.davisfuneralhomenh.com (603)883-3401 “ONE MEMORY LIGHTS ANOTHER.”