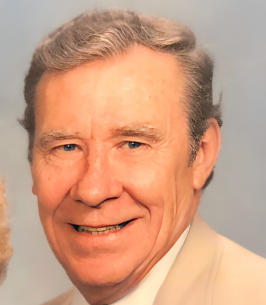 Robert D.W. Burns was born on August 15, 1928, in Brooklyn, New York to Elizabeth (Wilson) Burns and Edward J. Burns. Bob passed away peacefully in hospice with his son, Jim, and daughter-in-law, Carol, at his side on February 21, 2022.

Bob attended schools in various states but attended high school at Brooklyn Technical High School and graduated from Peekskill High School. After high school, he enlisted in the U.S. Navy and became a member of the Naval Air and flew in torpedo bombers and PBY patrol aircraft. He attended Clarkson University after his time in the service and obtained his BCE degree. He then married his beloved wife, Jean, with whom he shared almost 62 years of marriage before she passed in 2015.

Upon graduation, he embarked on a 32-year career in the Bell System. After many assignments, he became Chief of Staff to the V.P., New York. In that position, he was assigned the task of planning and implementing the breakups of the Bell System in the Northeast portion of the United States.

Bob was also deeply involved in civic and church activities. He developed the forecasting method for the Washington Irving Council of the Boy Scouts and was a member of the Mayor’s committee to control the NYC subway fare. He also was President of the corporation for the Peekskill Presbyterian Church as well as the Clerk of Session for the church.

Bob and his wife moved to Hollis, NH in 1992 to be closer to his daughter and grandchildren. In Hollis, he was once again active in church leadership as a member of the Hollis Congregational Church. At the church, he and his wife also enjoyed the opportunity to be active members of the church choir family.

Bob was also a member of the founding Board of Directors for the Rivermead Retirement Community in Peterborough, NH, and saw it grow from an empty field to the wonderful community it is today. Later, he spent eight years on the board of the Hunt Community in Nashua, NH.

Bob is survived by his son, Jim Burns, and daughter-in-law Carol Burns, and his son-in-law Peter Stauble, as well as grandchildren Caitlin Burns, Dave and Shari Stauble, Allison and Dan D’Ambrosio, Meghan and Mason Goslee, and Kristin and Dan Fogarty. He was the proud great-grandfather of Caroline D’Ambrosio and Adelaide D’Ambrosio, Bon Stauble, Ben Goslee, and Quinn Fogarty. He was also survived by his brother-in-law Dick Clark and his wife Debbie. Bob was pre-deceased by his wife Jean Burns and his daughter Lynn Stauble.