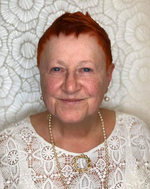 Roberta Dubick, a longtime nurse and longtime resident of Nashua, NH died unexpectedly in her home on Thursday April 30, 2020 at the age of 68.

Roberta is survived by her children; Nickie Dubick and Phil Conti and his wife Katie Conti and her grandchildren; Evan, Jack, Matthew, and Molly Conti.

Roberta was born in Milford MA on May 21,1952 to Margaret and Robert Goucher. She started in healthcare as a Home Health Aid and put herself through nursing school to become a LPN and then a RN. While there she formed a group of friends known as the “African Cultural Society.”

Her home was always open to her friends and family and was a safe space for anyone who needed it. She expanded this atmosphere worldwide when she hosted several Young Americans, a music outreach school that travelled the world teaching music to teens and formed the Facebook group “Parents of Young Americans” that now has 1500 members globally.

Her love of arts, music, old movies, and worldly style had a profound effect on her family as frequent debates ranging from geopolitical events to Renoir to Blazing Saddles with a background of classical music or Ladysmith Black Mambazo. She was able to achieve her lifelong goal of visiting Kenya in 2018.

Her diminutive stature of 4’10” could barely hold her fierce personality and stubborn streak. Her favorite quote is from Rosalind Russell in Auntie Mame, “Life is a banquet and most poor suckers are starving to death.”

SERVICES: Due to restrictions about funeral services during this pandemic, her family will only be having a very small, private graveside burial at this time. We have received many requests about sending flowers or remembrances. We are grateful for all of those offers, and understand that people feel the need to do something to honor Roberta but we are fortunate that there is nothing that we need at this time. Giving to charities and organizations whose mission she supported was at the very heart of who our Mom was. We decided in lieu of flowers, we will donate to several causes that were important to her, in her memory. If not, voting Blue would also really make her happy. https://bit.ly/2yxWXu7