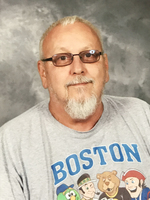 Roger Joseph Duhamel passed away on Sunday, July 28, 2019 at the Merrimack Community Hospice House after a period of declining health.
Roger was born on April 1, 1949 in Nashua to the late Charles and Gertrude (Beaulieu) Duhamel. He was an April Fools Baby and must have decided early on that he was going to embrace his birth right, because he had a way of making everyone around him laugh.
He was the third oldest of seven children and grew up terrorizing the streets of Nashua with his only brother Raymond. Not that anyone would believe this today, but he was actually once a choir boy too!
In his teenage years, he met a beautiful girl named Cindy Philbrook and despite being stood up by him on their first date, they fell in love. They were married on February 6, 1971 and soon welcomed their first child, Sherry into the world. Between 1973 and 1975, the added two more children, Rhonda and David, making them a happy family of five. His Children and his wife Cindy were the center of his universe.
Although their immediate family was small, Roger being one of seven children, and Cindy being one of eleven meant that there was always family close by, and for Roger, that meant people to entertain. Family gatherings were full of silly jokes and funny stunts to get a chuckle out of his many nieces and nephews. Spending time with family was one of his favorite ways to pass the time.
The family was expanded again in 1995 when his youngest daughter married her husband Chris Fleming. Chris and Roger spent many hours bonding over New England sports and of course beer…two more of Roger’s favorite things.
In September 2003 Roger became a grandfather when his only grandchild, Nathan Fleming was born. Nathan was the apple of his eye and he adored him. When Nathan was about 4 years old, he recorded a ring tone for his Papa’s phone that said “Papa your phone is ringing” and despite Nathen being almost 16 now, his little 4 year old voice is still the only thing you will hear when you call Roger’s phone.
Aside from being a loving (and funny) family man, he was also a loyal and hard worker. He worked at Triangle Pacific Cabinets until they closed in 1993 and then began working as a custodian at Bicentennial School in Nashua. He thoroughly enjoyed his time at the school and soon became a favorite among the teachers and students for his outgoing personality and sense of humor.
Roger enjoyed the simple things in life, music, (especially jazz), being outdoors, Patriots football and above all else, his family.
SERVICES: Because of his love of life, his family has decided to hold a Celebration of Life to honor his memory. Family and Friends are welcome to attend and are encouraged to dress casually and in their favorite New England Patriots attire. The celebration will be held at Davis Funeral Home, One Lock Street in Nashua on Friday, August 2nd from 12pm-2pm, followed by a brief service at 2pm. In lieu of flowers, please consider making a donation to the Merrimack Community Hospice House, 210 Naticook Road, Merrimack NH.