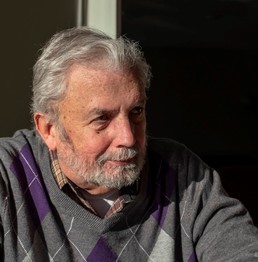 Ron Rioux of Nashua, NH died February 2, 2022, he was 78 years old. Born Ronald Raymond Rioux on November 17, 1943 to Lucien and Rose (Lewis) Rioux, he was a visible fixture in the Nashua area for decades. During his teenage years Ronnie could be found with his buddies (jeans cuffs rolled and DAs slicked back) hanging out at the Yankee Flyer diner over a plate of fries. That didn’t last very long as he soon met the love of his life, a girl named Susan. The two would go from being high school sweethearts, to best friends and lifelong partners. At the time of Susan’s death they had been married for 54 years.

After many years of valiantly trying to give his wife the daughter she had always yearned for, they had three boys. Each one of them learning the hard way what it’s like to have your father also be your coach. When Ron wasn’t glued to the soothing sound of Johnny Most calling a Celtics game, he could be found teaching legions of Nashua’s children how to play basketball in gyms all around the city. On his own time, Ronnie could be found down at the Y, taking, and throwing a few elbows out on the basketball court. And if basketball wasn’t in season, he would coach baseball a little. That’s how, in 1988, Mr. Rioux was able to follow his team, and one of his sons out to California for the Babe Ruth League World Series. He was also an avid outdoorsman, teaching his children about the natural bounty that New Hampshire had to offer; like sleeping in a wet tent, scaring the deer away, and getting mom to clean the fish.

Ron worked almost his entire career at Nashua Corp. on Franklin St., during which he was an active and passionate officer of his local union. That same dedication spread across the street in later years where he sat on the advisory board for Triangle Credit Union.

In the late 1990’s Ron found out he would need a liver transplant. Against all odds, he received a new liver in 2000. Once he had regained his health Ron spent the subsequent years tirelessly volunteering with the New England Organ Bank, trying to give others the same second chance that he had been granted. Ron was also a devout Catholic, and an active member of the Immaculate Conception Church.

Whether as Ronnie, Ron, or even Mr. Rioux, he and Susan were always welcome at the Club National where his lifetime of friends still gather to eat, drink, watch the game (any game), and play an awful lot of golf.

In lieu of flowers the family asks that you please consider registering to become an organ donor. Because of the gift of life our entire family received when Ron got his transplant, we had 22 additional years to write this obituary. Cash donations can also be made to Donate Life New England, 60 First Avenue, Waltham, MA 02451.

SERVICES: Relatives & Friends are invited to attend his Visitation on Tues. Feb. 8, 2022 from 4:00 until 7:00 PM at the DAVIS FUNERAL HOME, 1 Lock St., Nashua, NH 03064. Funeral Wednesday Morning with a Funeral Mass to be celebrated at 10:00 AM at the IMMACULATE CONCEPTION CHURCH, 216 East Dunstable Rd., Nashua, NH 03062 (PLEASE MEET AT CHURCH). Interment will be private at the convenience of the family at St. Patrick Cemetery in Hudson, NH. An online guest-book is available at www.davisfuneralhomenh.com (603) 883-3401. "ONE MEMORY LIGHTS ANOTHER."