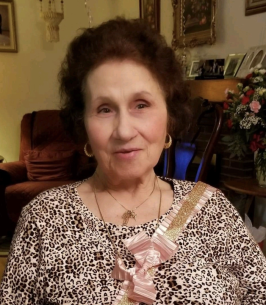 Falzone, Rosa of Nashua, NH passed away at St. Joseph's Hospital on Monday, May 16, 2022. Born in San Cataldo, Sicily in 1929, she was the beloved wife of the late Michael Falzone. (deceased July 6, 2005). They moved to France in 1959; then immigrated to the United States in 1965 where she became a proud and fully naturalized US citizen. She would have been 93 yrs old in August.

Rosa was a talented seamstress and devoted mother of Dina Falzone Kevorkian and her husband Bob, whom she loved like her own son, Joseph Falzone and his wife Theresa of NM, Salvatore Falzone and his wife Donie of VA, Maria Falzone of Merrimack. Cherished Grandmother (Nonna) to Salvatore Falzone Jr. and his wife Tracie of GA, Katherine Morgan and her husband Sledge of NM, Michele Falzone of NM, Michael Falzone of FL, and eight great-grandchildren. She also had many grand nieces and grand nephews who reside in Italy. She’s also survived by one brother, Luigi Falzone of Palermo, Italy (6 siblings are deceased).

Rosa lived life to the fullest; always happy and positive in all her dealings – never any negativity. She was an excellent cook and loved to entertain family and friends alike. Her Italian cooking was exceptional. Her spirit and memories will live on with all whose lives she touched. Her enthusiasm and charisma was contagious, even in her final months with her family and hospice friends who made her final days less painful. She was our angel on earth.