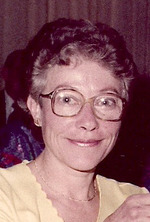 Sally Sumner, 85, died on September 10, 2019 in Hudson, NH. She was born in 1934 in Bridgeport, CT and grew up in Connecticut and New York. Sally had fond memories of summers on Cape Cod, where she sailed at Stone Horse Yacht Club in Harwich Port, skippering her own boat in the club's racing series. After graduating from Walnut Hill High School and Smith College, Sally lived in Manhattan and worked as an analyst at Standard Oil.

Sally moved to Windham Center after marrying Jackson Sumner, and it was there that they raised two children. During this time, she was an active volunteer with the Girls Scouts, Windham Community Memorial Hospital and Windham Center School. Sally also served as librarian for the Windham Free Library.

After college, Sally went on an extended trip through Europe and throughout her life always found joy in traveling. In retirement, she traveled to Germany, Holland and Norway. While at home, she enjoyed working in her many gardens, which were always in pristine condition.
She had a love of reading and playing bridge with the same group for nearly 30 years.

She is survived by her children and their spouses Jane and Dan Richardson, Robert and Eunhee Sumner, 4 grandchildren, her sister Wendy Ford, a nephew and two nieces.