To share your memory on the wall of William Callahan, sign in using one of the following options:

William is survived by his daughters Geraldine Callahan of Hudson, NH., and Kate Callahan of Easton, MA., He was the husband of the late Elizabeth Jeanne Callahan Allen. They were married in Quincy, MA. in 1966.

William attended St. John’s Catholic School, Latin Ridge Academy, and went on to graduate from Northeastern University in Boston, MA. He would receive his master’s degree in Criminal Justice. He also served his country honorably in the Korean War between 1952 and 1954. He stayed in the Reserves until 1962.

William was passionate about social justice and politics. He was honored to have Tip O’Neill as a family friend. He also got great joy from helping others, which showed in his involvement with Boy’s Town and The Smile Foundation . Bill spent his summers in Glens Falls, NY with many friends for the past 37 years

Services: Services will be private and held at the convenience of the family. For more details, please email Kate directly at 2015callahan@gmail.com The Davis Funeral Home, 1 Lock St., Nashua, NH., has been placed in charge of arrangements. (603-883-3401) “ONE MEMORY LIGHTS ANOTHER”.
Read Less

To send flowers to the family or plant a tree in memory of William Francis Callahan, please visit our Heartfelt Sympathies Store.

There are no events scheduled. You can still show your support by sending flowers directly to the family, or planting a memorial tree in memory of William Francis Callahan.
Visit the Heartfelt Sympathies Store 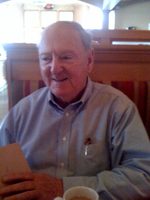