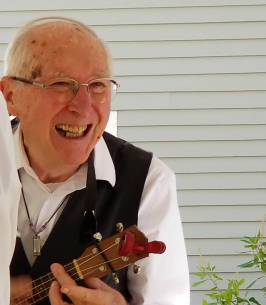 William served his country in the Army between 1953 and 1955 during the Korean War. William and Joanne moved around from El Paso Texas, California, and Detroit Michigan during his service.

After his retirement, William lived to volunteer, singing with the Wellspring singers for the Hospice House in Merrimack, visiting nursing homes with the Silver Lining Chorus and the Harmonica Saints and he was very active in the Nashua and Hudson senior centers. He was also known for the joy he brought by playing his ukulele at nursing homes and at local special events. He was known as “Mr. Bill” to Nashua Headstart students when he brought the joy of silly songs to their classroom.

Besides his wife Joanne, William is predeceased by their infant son.

SERVICES: Services will be private and held at the convenience of the family. Those who wish to send a memorial donation in William’s honor, may do so to the Nashua Senior Center, 70 Temple St, Nashua, NH, 03060 or visit them online at https://www.nashuaseniorcenter.org/donate/donate-now/ The Davis Funeral Home (603)883-3401 “ONE MEMORY LIGHTS ANOTHER.”